When you arrive in Tuscany, the first thing you notice as you approach Magliano is the gigantic walls surrounding the village.

From the outside, you can see the towers and the bell tower protected by this mighty belt. And around the charming Maremma countryside made of olive trees and vines.

Magliano is a village in the province of Grosseto, Tuscany, Italy. In addition to being known for its Etruscan settlements, it has nearby the medieval hamlets of Pereta and Montiano.

The first thing that is noticeable approaching Magliano is the gigantic walls that surround the village. From the outside, you can see the towers and the bell tower protected by this mighty belt. And around the charming Maremma countryside made of olive trees and vines.

You enter Magliano from the Porta San Giovanni and walk along the narrow streets to walk the walkways on the walls. Rich in several stately palaces, Magliano is also a lively tourist attraction full of places to eat or entertain.

Among the most important attractions is the Palace of Checco il Bello, dating back to 1200, with a remarkable Gothic façade. San Giovanni Battista’s parish church shows the different renovations that took place during the Gothic and Renaissance periods. The baptismal font of 1439 is a remarkable example of value.

On the façade of the Palazzo del Priori, it is possible to know the coats of arms of the podestà that have ruled Magliano over the centuries. The church and the door of San Martino, rich in sculptures, conclude Corso Garibaldi’s attractions.
The experience of walking on the walls is one of the activities that should not be lost if you arrive in Magliano. From the walls, you can also enjoy the spectacle of a panorama of the Maremma countryside without equal.

A few meters further on, we find the Porta San Martino with a splendid view of the countryside. At this point, return to the Pieve di San Giovanni Battista and go down the small road surmounted by the bell tower; you will arrive at the
Just outside Magliano is the Witch’s olive tree, a tree with an estimated age of about 3500 years.

It is said that in medieval times, around this olive tree, pagan rites were celebrated. Its fame and shape make it easy to guess why this tree was given Witch’s Olive Tree name.

Several important Etruscan necropoleis have been found in the territory of Magliano.
An attraction of the surrounding territory Magliano is the excavations of Doganella, the Etruscan excavations of the city of Kaloùsion, of which, however, only the base of some buildings has been excavated.
But one of the things that are of great interest, especially for archaeologists and enthusiasts of ancient history, is Magliano’s lead.

It is an Etruscan find of great value because it served to understand many words of the Etruscan alphabet, like the Egyptian Lipstick Stela.
It is a lead disc of about 8 centimeters, dated around the 5th-century BC.C., on whose faces are engraved a spiral inscription of seventy words.

Thanks to this object, today, the Etruscan alphabet is more understandable, although understanding the language is still mysterious. The original Piombo di Magliano can be admired in the archaeological museum of Florence. 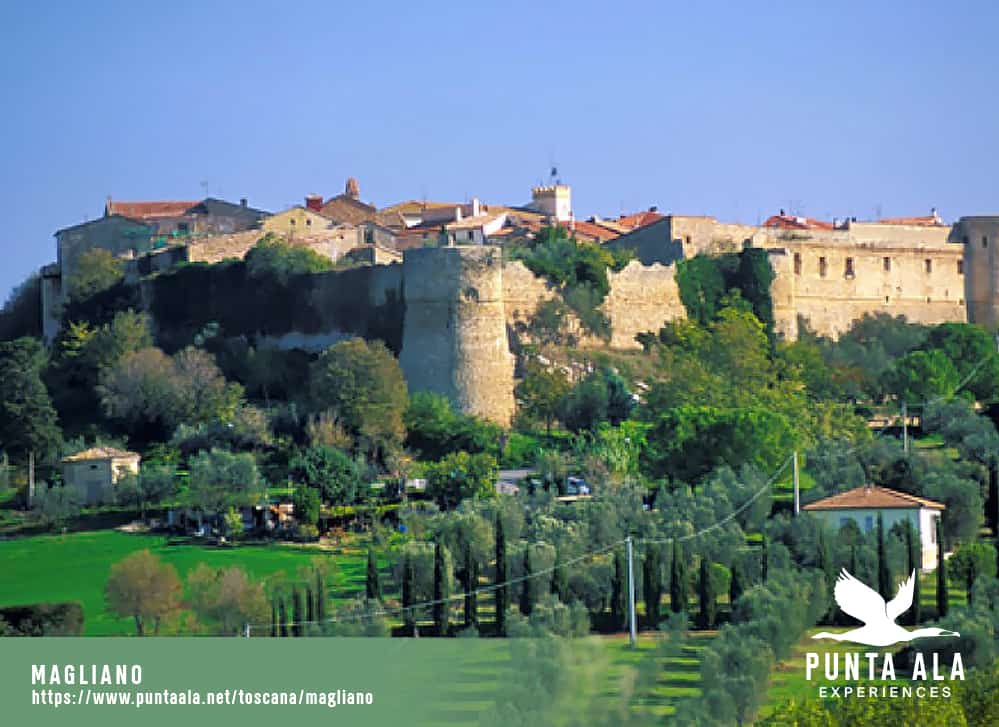